For forty years, HADES has been the cradle for research into geological disposal in poorly indurated clay in Belgium. Experiments in that underground laboratory proved that such a facility could be dug out industrially and that long-term safety can be ensured. This acquired knowledge enables Belgium to take the next steps towards a real repository. Pierre-Yves Dermagne, Deputy Prime Minister and Minister of Economy and Employment, and Tinne Van der Straeten, Minister of Energy, congratulate EIG EURIDICE, ONDRAF/NIRAS and SCK CEN on this anniversary. 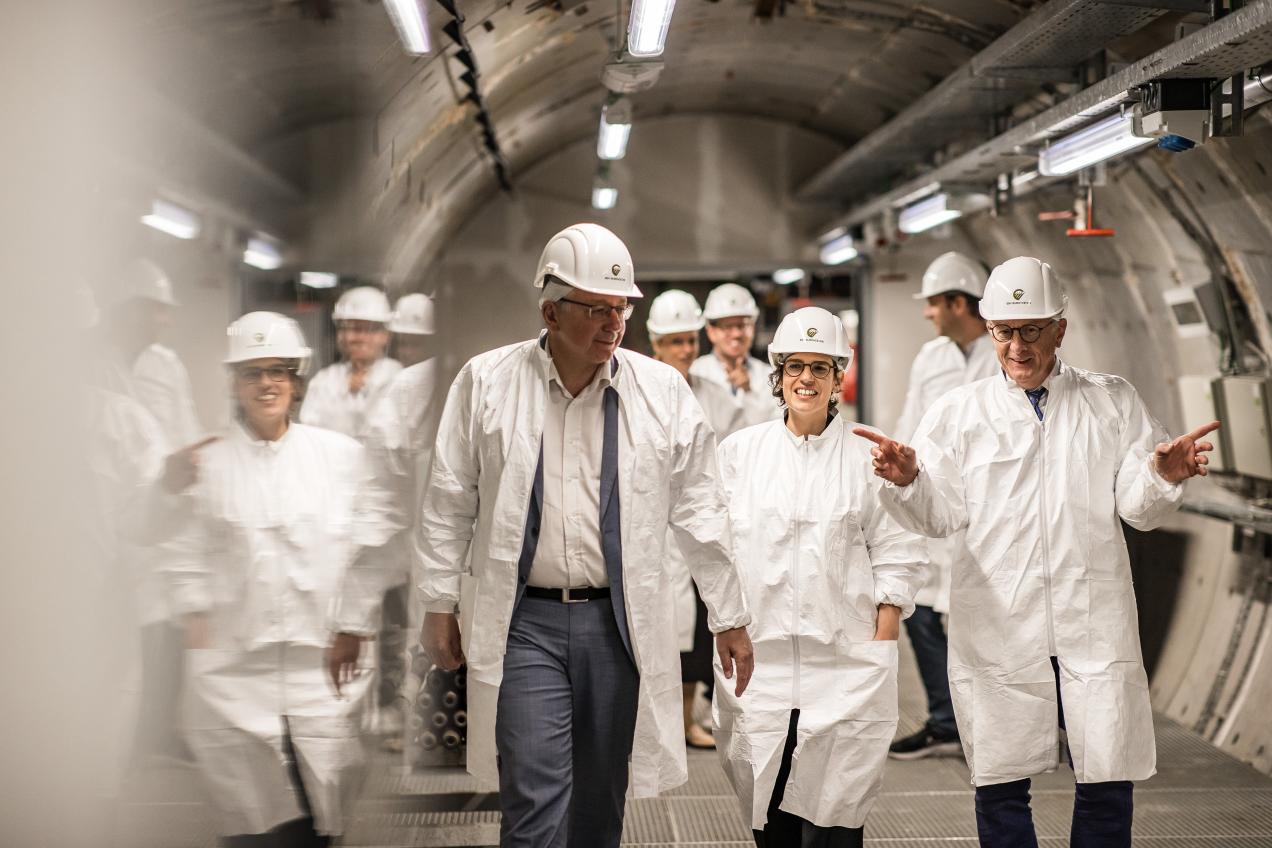 In the 1970s, the first commercial nuclear power plants entered the Belgian energy landscape. Soon, the issue of long-term management of high-level and/or long-lived waste also came to the fore – geological disposal appeared on the radar internationally as a potential management solution. The nuclear research centre SCK CEN immediately took the initiative to investigate this possibility. "To begin with, we carried out tests in laboratories, but soon we felt the need for an underground laboratory to test geological disposal against reality. The aim was to investigate and demonstrate its safety and feasibility under representative conditions," says Eric van Walle, Director-General of SCK CEN. In the 1980s, the research centre began digging out an underground laboratory called HADES. During that same period, ONDRAF/NIRAS was commissioned to organise safe radioactive waste management in Belgium. In 1995, the two parties united to form EIG EURIDICE, an economic interest grouping. This economic interest grouping took HADES under its wing.

Nowhere in the world was there another clay laboratory built for that specific purpose. Not surprisingly, some pioneering exploratory work was done. "We tested excavation techniques there, experimented with materials for the gallery wall, and conducted experiments to map the behaviour and properties of clay," explains Eric van Walle. The underground laboratory can now blow out forty candles since then. In that time, HADES has grown to be a cradle for research into geological disposal. Pioneering exploratory work gave way to industrial demonstration projects and large-scale trials. One example is PRACLAY, a ten-year heating experiment. "All this has led to an extensive knowledge of the clay layer and a good understanding of all the processes relevant to the safety of a repository," continues Eric van Walle. 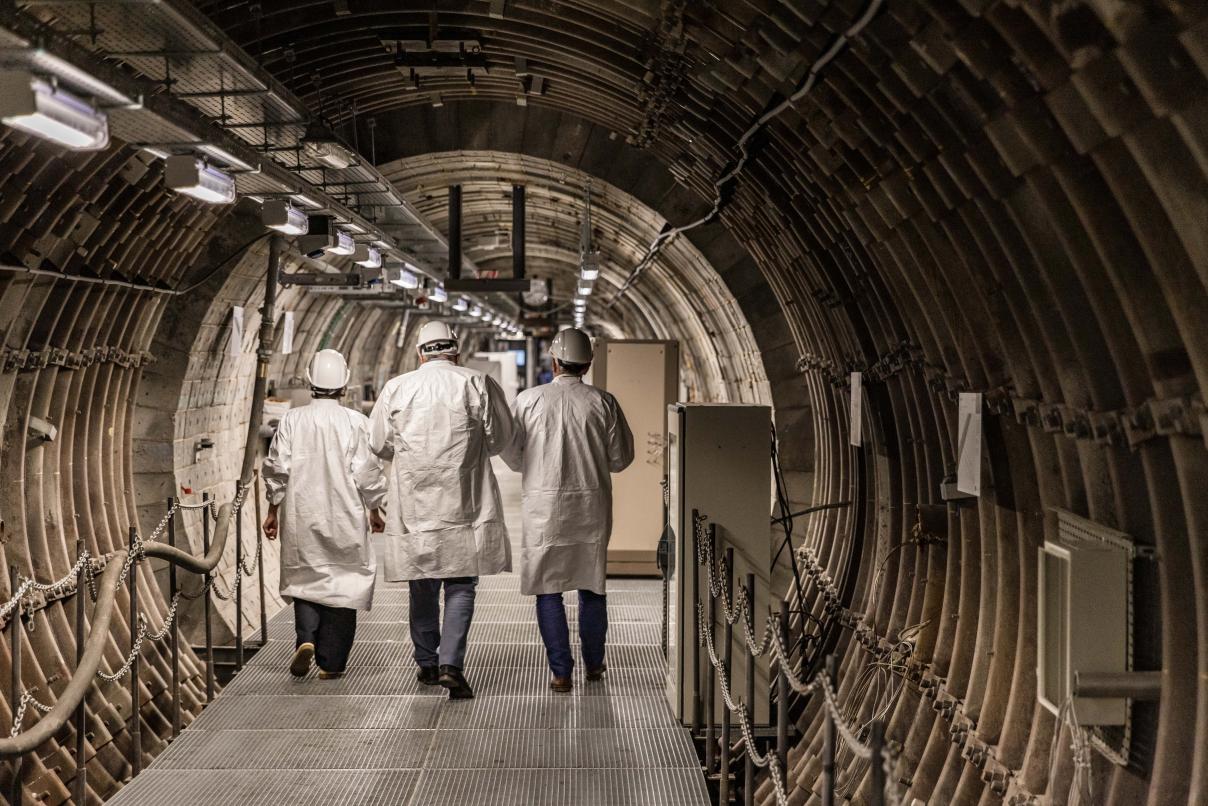 The Director-General speaks of a safety time scale of up to hundreds of thousands of years. "Radioactive waste must be isolated from humans and the environment for longer than anything man has built so far. On such a long time scale, above-ground storage buildings don't offer that guarantee – stable, deep soil layers do," says Eric van Walle. By properly packaging the waste and enclosing it in a suitable, stable soil layer, the radioactive substances will remain isolated from people and the environment, as well as from future changes to the Earth's surface, for a long time. This includes climate change or social evolutions. Geological disposal is a system that protects future generations without them having to do anything for it. We call that passive safety.

40 years of research in the underground laboratory HADES have led to an extensive knowledge of the clay layer and a good understanding of all the processes relevant to the safety of a repository. We are speaking of a safety time scale of up to hundreds of thousands of years. On such a long time scale, above-ground storage buildings don't offer that guarantee – stable, deep soil layers do.
Eric van Walle, Director-General of SCK CEN

“Based on 40 years of research, ONDRAF/NIRAS proposed geological disposal as a national policy for the long-term management of highly radioactive and/or long-lived waste, coupled with a public debate. This way, we can arrive at socially supported decisions on how geological disposal can be achieved,” states Marc Demarche, Director-General of ONDRAF/NIRAS. That proposal was approved at first reading during the Council of Ministers on 1 April 2022. In practice, ONDRAF/NIRAS will now ask the King Baudouin Foundation to prepare a public debate with citizens as well as experts such as the nuclear authority (FANC), producers, regional governments, federal authorities and academics. In general, the public debate comprises several standard phases such as an online survey and various forms of participation, for example a public forum and thematic workshops, in order to finally come to joint conclusions that are supported by everyone. "We will then use these conclusions to prepare and submit to the government the second step of the National Policy, namely the framework of the decision-making process that should lead to the implementation of a solution. In any case, it is certain that we cannot pass on our responsibility to the next generations," Marc Demarche concludes.

Experience with the above-ground disposal project has shown that complex issues such as long-term management of radioactive waste can only be solved through participation. We want to go on with this approach, which has in the meantime become part of ONDRAF/NIRAS’ DNA, to provide society with a solution for the long-term management of medium and high-level long-lived waste.
Marc Demarche, Director-General of ONDRAF/NIRAS 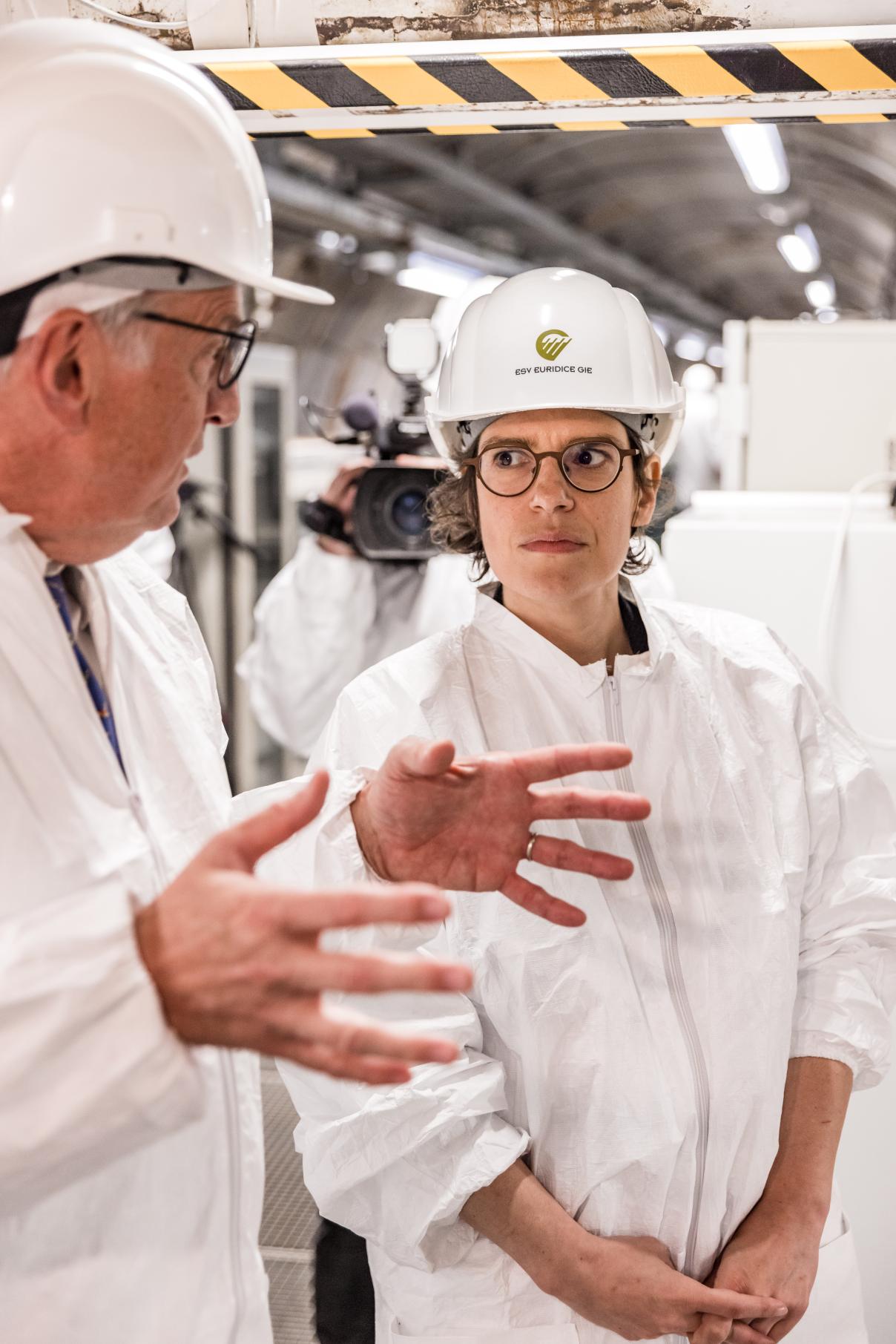 Today, the EIG EURIDICE and the partners in the economic interest grouping, ONDRAF/NIRAS and SCK CEN, are celebrating its 40th anniversary. Both Ministers responsible, Pierre-Yves Dermagne and Tinne Van der Straeten, congratulated them on that anniversary.

“Geological disposal of radioactive waste is not only a scientific and technical issue, it is also a societal one. It is crucial that citizens are informed and involved in the decision-making process about how Belgium can realise an underground repository. It will also allow for a realistic cost estimate of the disposal project of the century and for guaranteeing the necessary funding,” acknowledged Pierre-Yves Dermagne, Deputy Prime Minister and Minister of Economy and Employment.

Tinne Van der Straeten, Minister of Energy, is also delighted with the advanced science. "The dismantling of the facilities, the management and disposal of irradiated fuel will be the longest, most expensive and most delicate project our country has ever known. The decision to dispose of the waste is one that belongs to all Belgians, not just to me as a minister or to this government. It is therefore only logical that Belgians should be heard and have a say. The decisions we make about this waste will affect hundreds of future generations. HADES' long-standing expertise is essential in the decision-making process."

Every human activity creates waste. This also applies to the use of radioactive substances in medicine, agriculture, industry, scientific research and in the production of electricity in nuclear power plants. How is this different from ordinary waste? Radioactive waste contains substances that emit ionising radiation. This radiation penetrates material and can alter it or damage living tissues. That means it could be dangerous to people and the environment. Radioactivity does diminish with time, whether it is a few seconds, minutes, years, hundreds of years or hundreds of thousands of years. Geological disposal is internationally considered to be the only management solution for keeping high-level and/or long-lived radioactive waste shielded from humans and the environment.

How long does the waste need to be isolated from humans and the environment? In line with the intensity of the radiation and the lifespan, the radioactive waste is subdivided into three categories: low, medium and high-level waste. For the low or medium-level and short-lived waste, that process is faster than for the high-level and/or long-lived waste. The low or medium-level and short-lived waste lasts for hundreds of years before the activity level decreases by a factor of 1,000. In the case of high-level and/or long-lived waste, that period extends to hundreds of thousands of years.