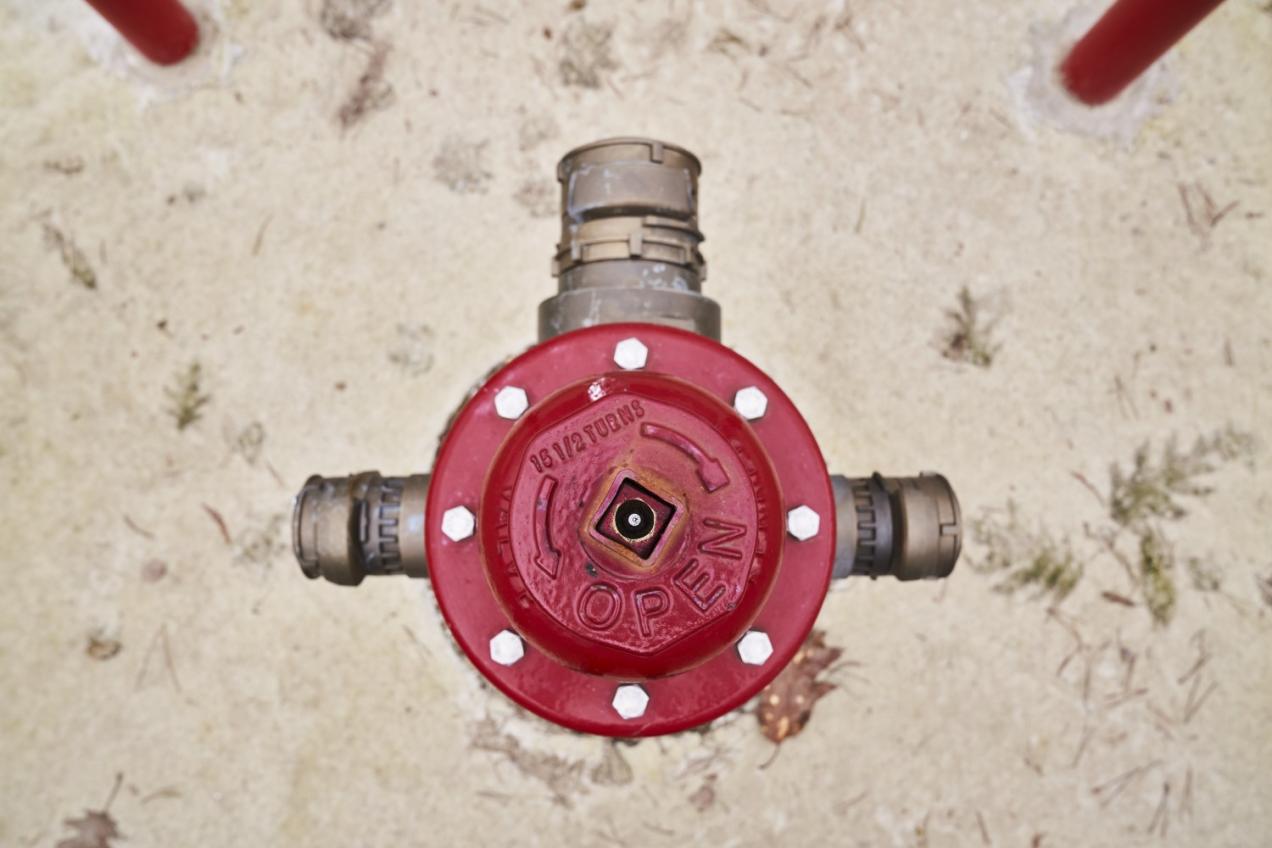 Underneath the technical site of SCK CEN lies over 10 kilometres of new extinguisher water pipes. Water flows out of the 110 fire hydrants connected to it at a rate of 2,000 litres per minute. "That's more than twice our former capacity. The commissioning of this extinguishing water network therefore marks a remarkable step-up in our fire safety and firefighting," notes Eric Geerinckx, manager of the company fire brigade. Numerous safety mechanisms are built into all nuclear facilities that SCK CEN operates or designs, and these safety mechanisms serve to prevent incidents. SCK CEN has also shaped its fire safety and firefighting strategy with the same philosophy in mind. It is impossible to eliminate fires completely, however, and that's where being prepared comes in. In a fire, every second counts. The SCK CEN company fire brigade is on standby 24/7 to respond immediately in the event of an alarm. "The faster we get to the scene, the more quickly we can put out the fire," says Eric Geerinckx. And fast they are, the 29 enthusiastic and motivated firefighters of SCK CEN, who are mainly volunteers. It takes no more than 15 minutes for them to arrive at the scene. However, short intervention times are not the only factor that matters. The team must also have the appropriate materials and equipment. "That equipment must allow us to put out the fire or to keep the fire under control while waiting for the public fire brigade," states Geerinckx. SCK CEN has no need for concern about suitable resources. After all, in 2020 it commissioned a brand new fire extinguishing water network. 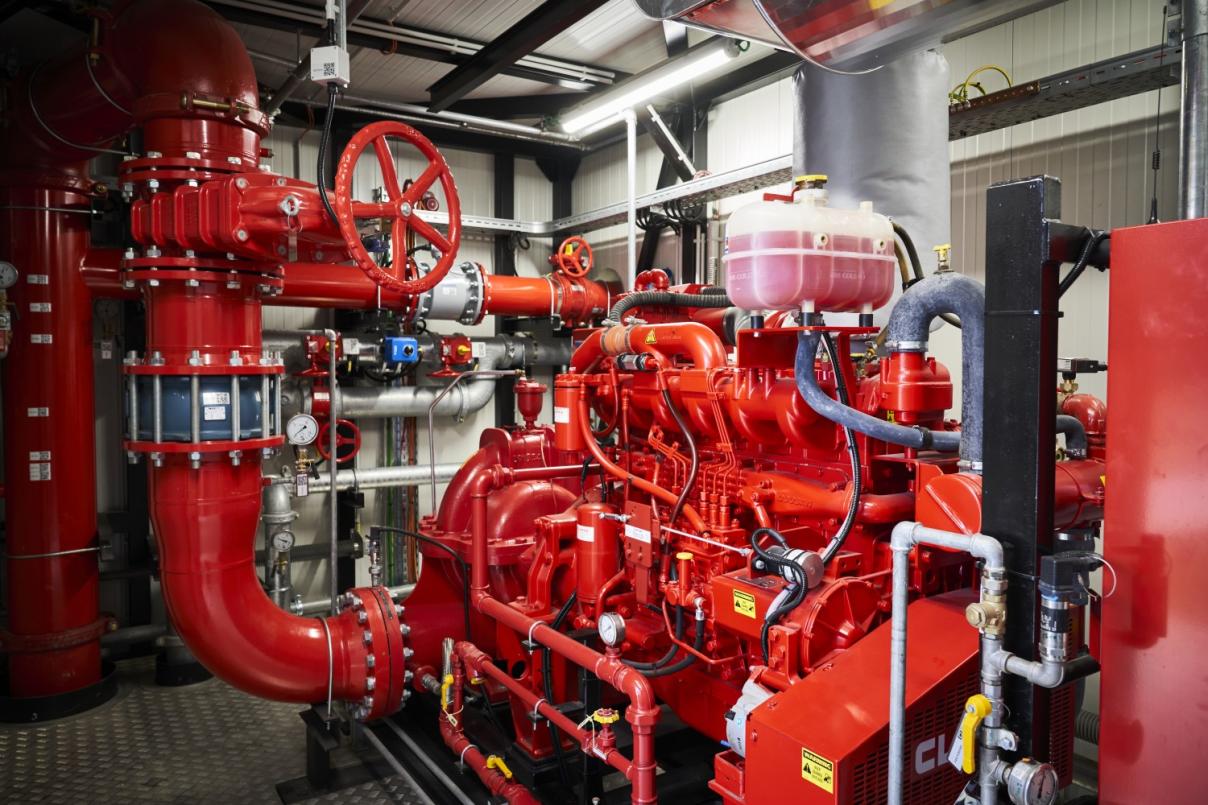 This extensive network of water pipes provides the company fire brigade with extinguishing water. The water is drawn from four water tanks, spread over two locations. The tanks are each five metres high with a diameter of 13 metres, and their size allows each of them to hold 700,000 litres of water. Each location has two diesel-powered pumps, which pump the water from the tank into the network at 11,600 litres per minute. With this capacity, SCK CEN can now comfortably bridge the time until the public fire brigade is able to make the tertiary extinguishing water supply operational. "A tertiary fire extinguishing water supply is a virtually unlimited water supply that may be located a great distance away," Geerinckx explains.

We always have a workforce and extinguishing water available to fight fires.
Eric Geerinckx

Then came the technical puzzle. Where should the technicians fit the fire hydrants? This is important in order to avoid the company fire brigade having to unroll several fire hoses to be able to connect to the water supply. How long does it take to refill the water tanks? What if one of the tanks is suddenly breached? This would release 1,400,000 litres of water from each, forming a 'mini-tsunami', and this 'mini-tsunami' should not cause other problems. "On top of that, we had to incorporate into the design the other recommendations that arose from the stress tests at the time. Specifically, we had to provide a backup system for each system. For example, we have spread four tanks over two locations, so that if a plane were to crash at one of the locations, we still have a buffer supply available. Then we started work in 2018 and completed it in 2020," says Marc Blockx, who has been closely monitoring the site. "So we always have a workforce and extinguishing water available to fight fires," Geerinckx summarises.

Nuclear and petrochemical firms face similar risks,
so we had to implement a similar system.
Jan Veraghtert

In order to be able to act quickly in the event of a fire, the company fire brigade must be familiar with all the actions it needs to carry out. "In crisis situations, there's no time to wonder how the firefighting equipment works or what deployment methods to use. That knowledge needs to be ready when needed, and at that time you have to perform those actions without thinking. Your focus must be on the fire, not the actions. And that's why we hold drills frequently," explains Geerinckx. SCK CEN holds fire drills every fortnight, provides special training for its drivers, and organises one large-scale joint exercise with the public fire brigade each year. These drills are not only a practical must, but also a statutory requirement. This is contained in Article 17 of the 'Belgian Royal Decree on safety requirements for nuclear installations': 'For each location where a fire could affect equipment that is most essential for nuclear safety, or where radioactive materials are present, a fire-fighting strategy must be developed that is kept up-to-date and is the subject of a training programme.' "Double-check," Geerinckx concludes.

Following the Fukushima accident in 2011, the European Council imposed stress tests on all active nuclear reactors within the European Union. These tests must demonstrate the extent to which the nuclear reactors can withstand extreme natural phenomena such as flooding and earthquakes. The analysis of these tests was carried out in the period 2011-2013. The recommendations were incorporated into the design of the extinguisher water network. The design proposed in 2015 was updated on the basis of a detailed study, which was developed by VK Engineering. This detailed study zoomed in on two networks: the extinguisher water network on the one hand, and the drinking water network on the other. SCK CEN received feedback from both internal and external experts, including FANC, Bel V, and the public fire brigade. A final design was ready in 2018. Work began shortly afterwards and was delivered two years later by the contractor DENYS.

BR2 produces record quantities of medical radioisotopes.
More than 12 million patients have been helped thanks to this production.