Flexible to use, accurate in measurements. After years of testing, the nuclear research centre SCK CEN proved that drones can map out radioactivity with extreme precision. “Now is the time to take the leap from research to industrial deployment,” says Geert Olyslaegers, drone pilot at SCK CEN. By working with the Belgian aviation specialist SABCA, SCK CEN hopes to land there quickly. 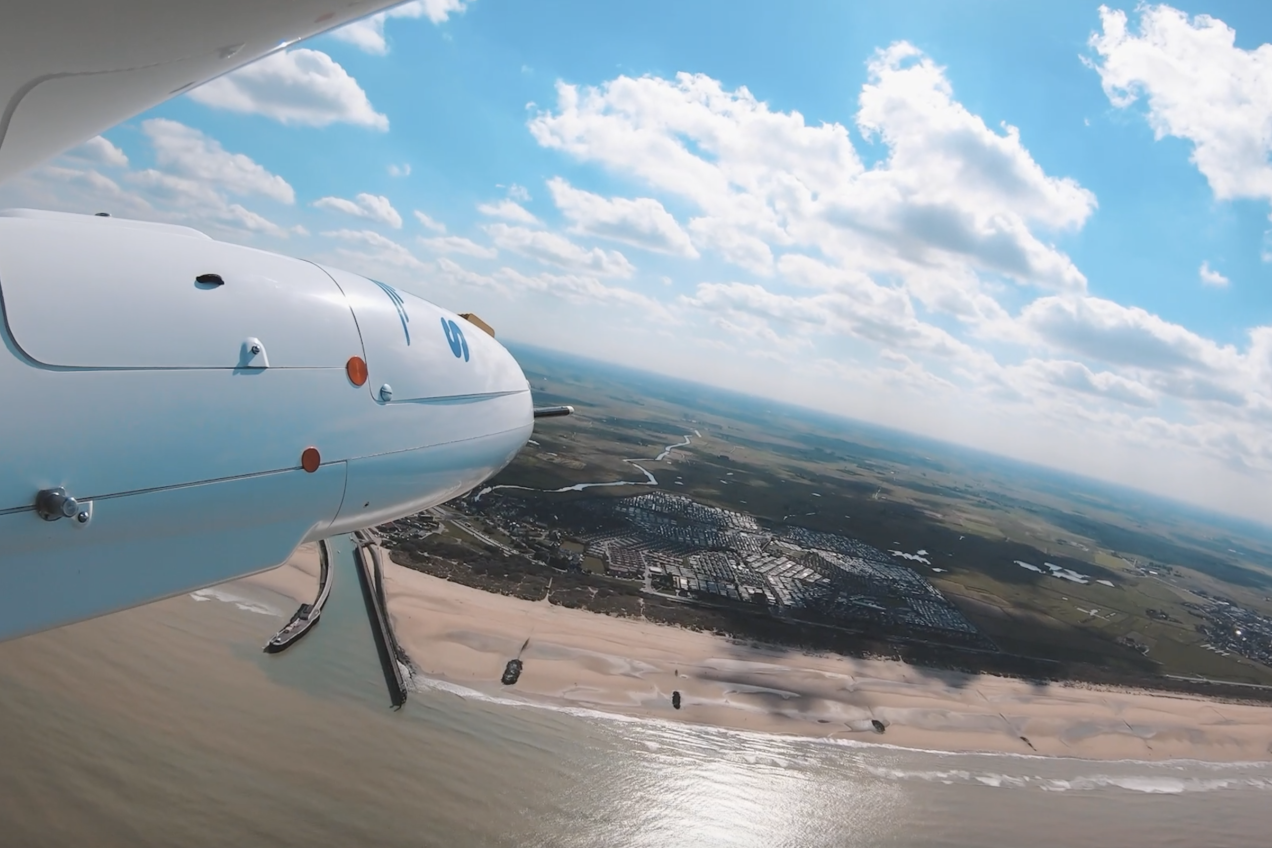 Monitoring the growth process for cereal crops, inspecting offshore wind turbines and transporting medicines: Drones are conquering the business world. Very soon, the nuclear sector too will be able to rely upon the assistance of these unmanned aircraft. The drones will take radiological measurements, and do so without any human intervention. “This represents an important step forward in radiological protection,” says Johan Camps. The SCK CEN scientist sees potential in three domains. “The drones can fly in the context of emergency planning, decommissioning and radiological monitoring of nuclear and industrial sites and their surroundings. The advantage of drones is that they can map out all the nooks and crannies that we cannot reach on foot or with a helicopter. This information flows back to us in real-time, while the drone is still in the air. In short: information in real-time from a larger number of specific locations.”

In 2015, SCK CEN assembled an enthusiastic research team to explore the possibilities of drones in a nuclear setting. The nuclear research centre now has two licensed drone pilots and has organised numerous test flights in collaboration with FPS Home Affairs. Those test flights allowed us to improve our measurement equipment and ensure the quality of measurement results. “Now is the time to take the leap from research to industrial deployment,” says Geert Olyslaegers, one of the drone pilots. By partnering with the Belgian aviation specialist SABCA, SCK CEN hopes to land there quickly. Olyslaegers: “SABCA provides services to the civil, space and military aviation industries. The company has experience with drone flights in a challenging context and knows the corresponding laws and regulations. We’re combining this expertise with our nuclear and radiological knowledge for peaceful applications. It creates a synergy that promotes quality, reaching deeper.” 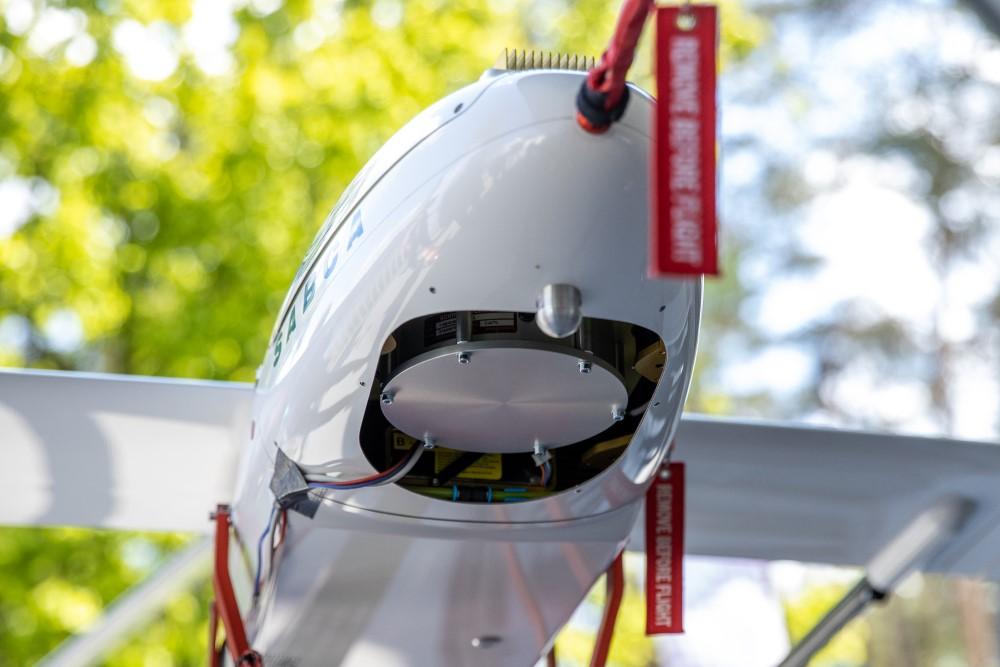 The drones will take radiological measurements without any human intervention. This represents an important step forward in radiation protection.
Johan Camps 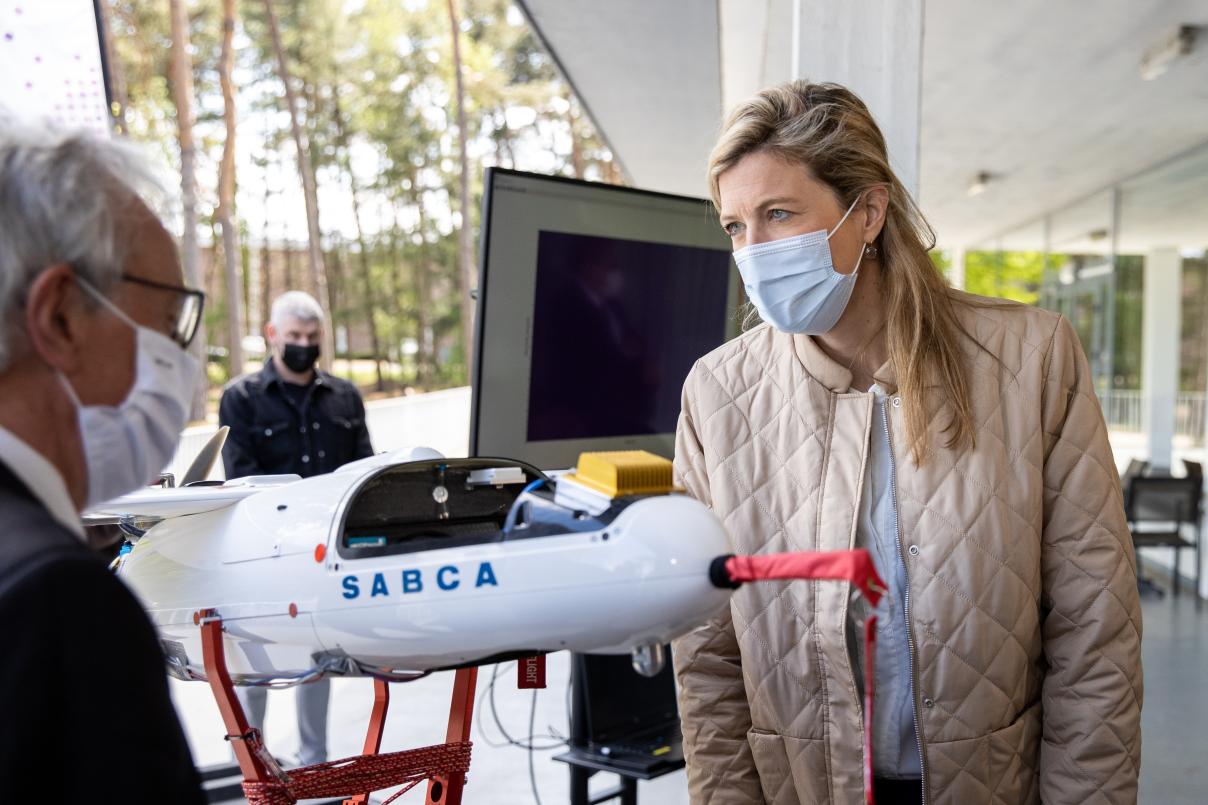 Thanks to this synergy, industrial deployment is within reach. Both partners emphasise, however, that this is an industrial demonstration project(*). “We’re convinced that use of drones will enable the nuclear sector to take precise measurements on a large scale. Whether drones will also become the standard, only time will tell. First, it’s up to us to perfect that technology down to the last detail,” says Camps.

(*)This demonstration project, which is in full swing, started on May 18, 2021. The launch was announced in the presence of Annelies Verlinden, Minister of the Interior. She sounded delighted at the launch.

By ‘technology’, he is referring to the scintillation detector, as it is known, that will be attached to the drone. “The device measures radioactivity by counting flashes of light in the scintillation material which are caused by the passage of the ionising radiation particles, which in turn indicates the amount of the radiation dose. The more flashes of light, the more radiation,” Olyslaegers explains. The detectors were designed not to exceed the maximum payload – the drone’s maximum carrying capacity – while retaining the highest possible sensitivity of measurement.

Both partners have now completed two test flights, which confirmed the desired high measurement sensitivity. “We catapulted a fixed-wing drone into the air and flew it over the fields. First in circular movements, then in a grid. We had it fly both low and high to test whether we could record a difference in readings. And indeed we could. So the measurement equipment passed with flying colours,” said a satisfied Olyslaegers. During the test flight, no radioactive sources were hidden on the training grounds. “The natural radioactivity contained in the soil served as a source. It once again demonstrates the sensitivity of the detector.”

Innovative projects for improving the protection of the population, the environment and the workforce have my full support.
Annelies Verlinden 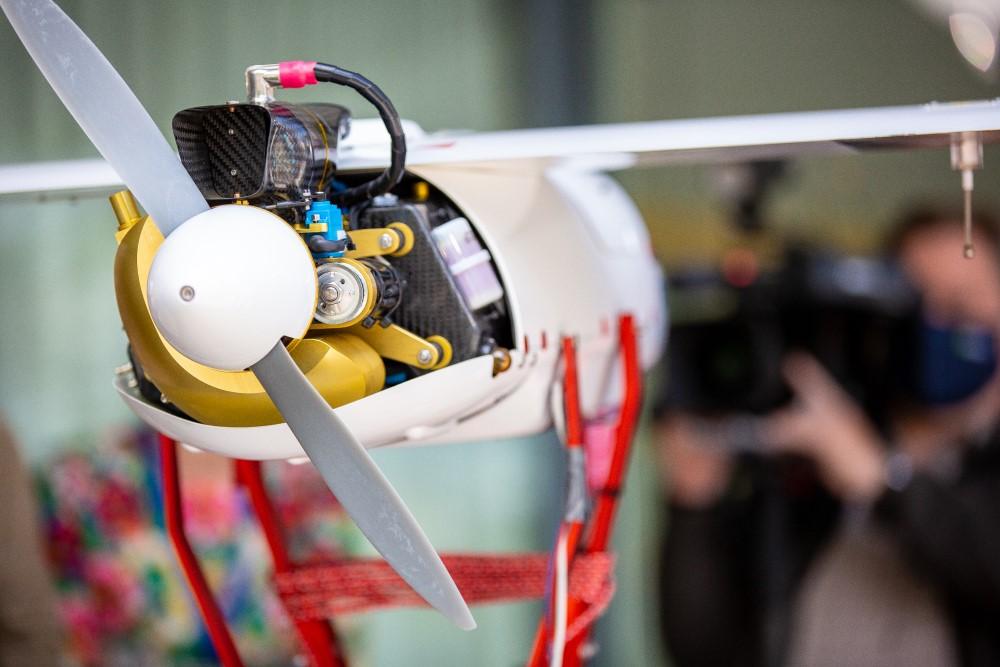 The fixed-wing drone is just one of two drone types that the aviation specialist supplies. The project is also studying the use of a multicopter. “A fixed-wing drone can continue to fly autonomously in the air for hours, while a multicopter can carry heavier detectors without sacrificing flexibility,” explains Camps. “The first drone can monitor a larger area. The second drone can hover on the spot to get a very local image. The choice of drone depends on the application.” The detector for the multicopter is still in development at this time.

This innovative project on the use of drones falls within the scope of the FPS Economy’s energy transition fund, which encourages and supports research, development and innovation in the field of energy. The projects must relate to one of the three thematic axes: renewable energy sources, nuclear energy applications, and grid balancing and the security of supply. Overall, a budget of 25 million euros is being distributed across the various projects. SCK CEN and SABCA were awarded a subsidy of 1 million euros and will invest additional sums into the project themselves.

All-seeing eye of the nuclear sector

The industrial demonstration project ‘Buddawak’ was named after ‘Buddawak Burri Bootyau’, an Australian sooty owl. “Owls have acute vision. With this project, we want to make the invisible visible,” concludes Camps. The choice of this owl is not accidental. The animal lives in regions of Australia that contain a lot of natural uranium in the soil.