Forest fires Chernobyl: increased radioactivity near fires but no danger for the population

Since 3 April, Ukraine suffers from forest fires in the so-called exclusion zone around the nuclear power plant of Chernobyl, where in 1986 the most severe nuclear disaster in history took place. People are worried about the increased radioactivity that is measured in the immediate vicinity. Is there really cause for concern? Will the weather conditions convey the radioactivity from the burning forests to Belgium? Our experts from the Crisis Management and Decision Support team closely monitor and analyse the fire together with the Royal Meteorological Institute (KMI). 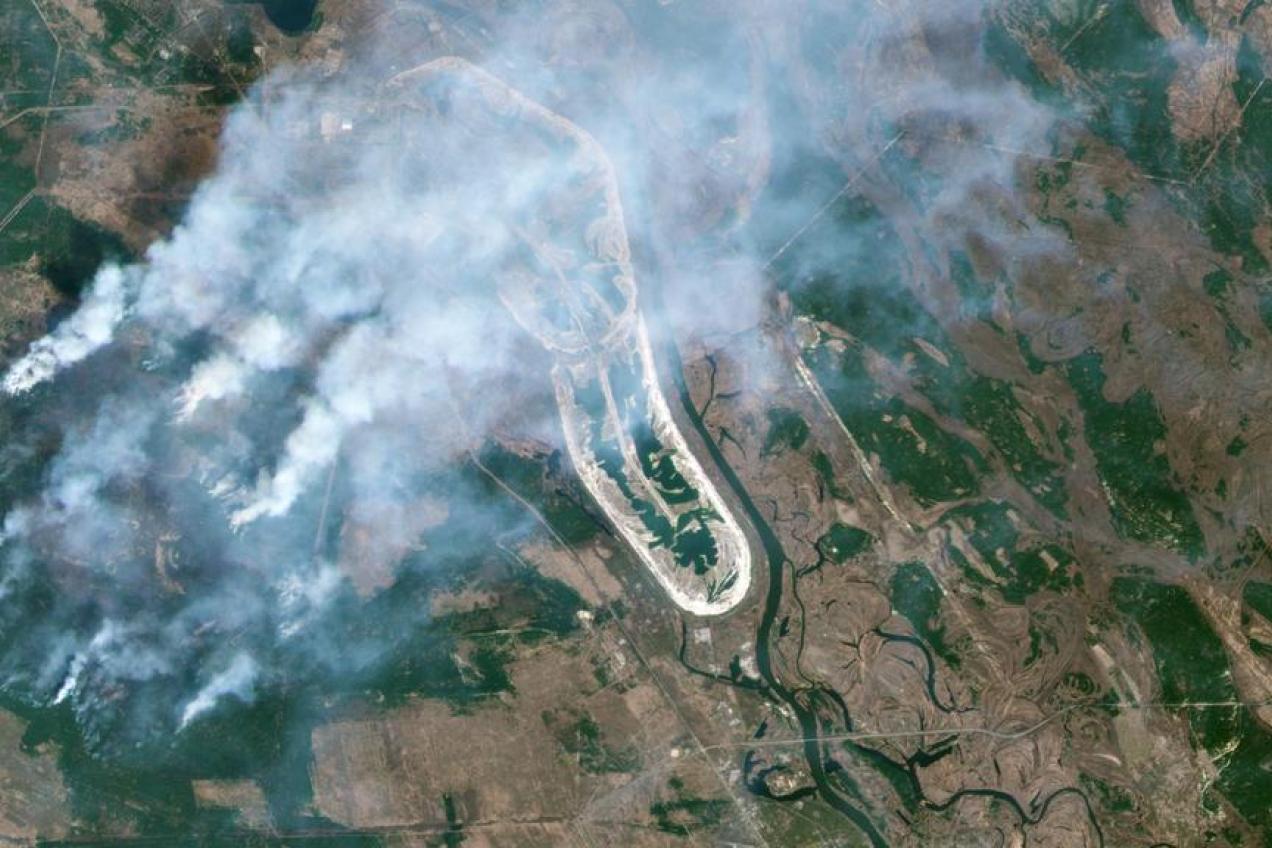 What do these fires do to the radioactive forests?

The fires in radioactively contaminated areas around the nuclear power plant of Chernobyl bring deposited radioactive particles – originating from the accident – into the air. The wind carries these particles along with it, together with the cloud of smoke, dilutes them and spreads everything over a large distance. For firemen trying to get the fire under control, this poses an additional risk, but the further the cloud of smoke moves away, the smaller the hazard to humans and animals becomes. In Kiev, for instance, the measured concentration in the air is already so small that it no longer poses any threat.

No cause for concern

In Belgium, FANC continuously monitors the radioactivity and nuclear radiation in the environment. A close network of detectors across the country monitors possibly increased doses. In addition, SCK CEN and IRE take samples that are analysed in laboratories. SCK CEN recently purchased the Snow White equipment, which enables to measure extremely small amounts of radioactivity in the air. This installation sucks up large quantities of air (up to 900 m³/hour) and leads it across filters that are replaced and analysed. Because the system sucks up large quantities of air, SCK CEN can detect very low concentrations of radioactivity.

This allows SCK CEN researchers – together with up-to-date weather data from the KMI and measurements performed by foreign partner institutes – to monitor the situation and to check whether there are traces of radioactivity from the Chernobyl region. They are not that worried: “You cannot compare the current radioactivity with the high doses that were released immediately after the accident. Yes, the forests are still radioactive and emit pollution into the atmosphere, but in Belgium we won’t notice much of it and will stay well below the standard of what is hazardous to humans and animals", says Christophe Gueibe, researcher at SCK CEN. 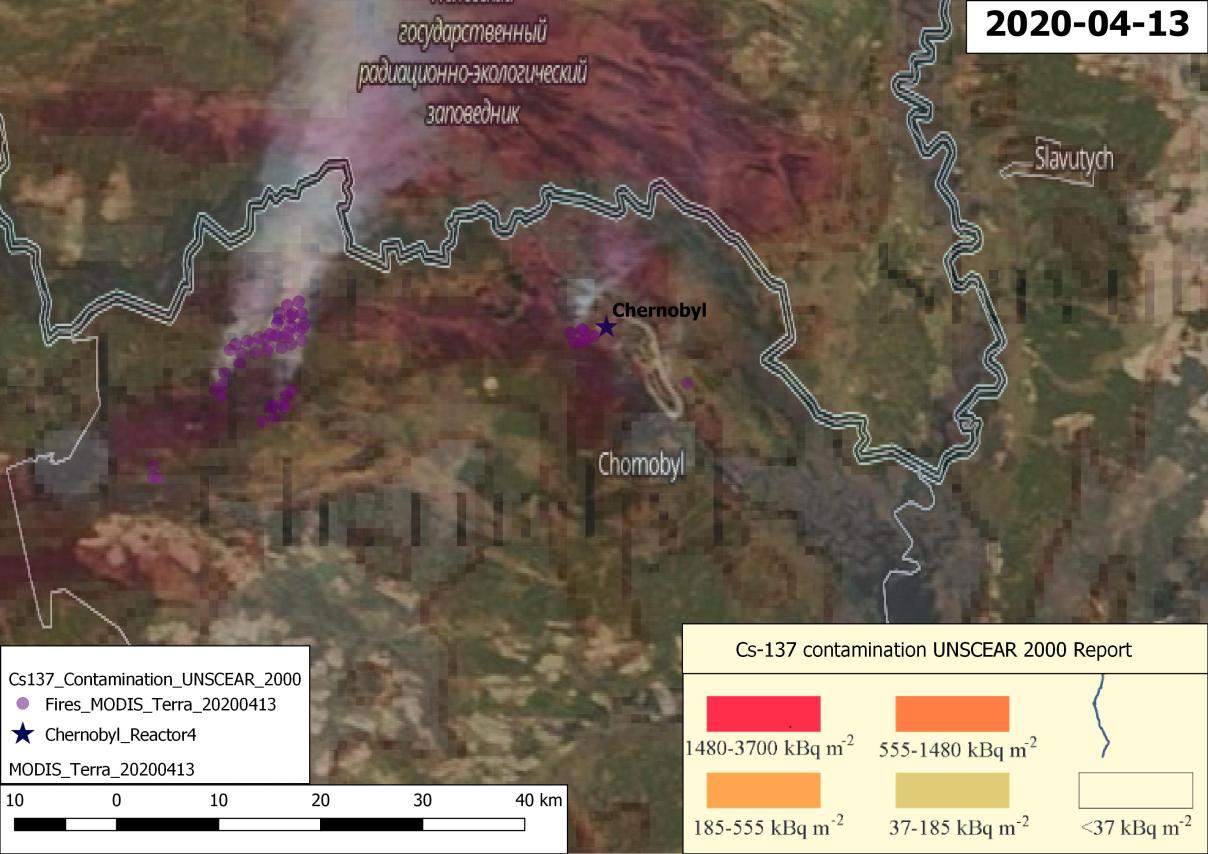 Close to the fires, a higher amount of Caesium-137 (Cs-137) has been measured. So far, small amounts have also been measured at several locations in Ukraine and in Russia. It is very well possible that in the following days measuring stations in Central and Western European countries will also detect very small amounts of caesium but the dilution will by then be so strong that this will not cause any health risk whatsoever. Did you know that every day Cs-137 is measured in small quantities in the soil in many places across the world? This mainly originates from above-ground nuclear tests from the past.

Monitoring in cooperation with KMI will go on

On 14 April, the Ukraine authorities communicated that the forest fires were now under control. The rain above Chernobyl was helping the firemen to fight the fire, a part of which had now been extinguished.

The media has just reported that new forest fires have broken out in the exclusion zone, but not in the immediate vicinity of the reactor. SCK CEN uses satellite images of KMI to verify this and continues to closely monitor the situation for Europe together with KMI.

“Based on weather data such as wind speed and wind direction in combination with the knowledge of Cs-137 that we have, we can predict fairly accurately which trajectory the smoke plumes will travel and how strong the residual contamination hazard of the radionuclides will be at that moment. In this way, we can always stay ahead of the risks and take actions in a timely manner. However, there is no reason for concern for the population. When you inhale the air of the forest fires in Kiev, this will still remain less than 10,000 times the natural radioactivity that is always present in the human body", explains Pieter De Meutter, researcher with our research centre.

Interested in the scientific report with detailed monitoring data? Consult the status report.